***We are offering FREE media mail shipping on books. We are open from 10am-7pm Monday through Saturday and 10am-6pm Sunday. Phones may not be answered due to a high volume of calls.***

Becoming Dr. Seuss: Theodor Geisel and the Making of an American Imagination (Paperback) 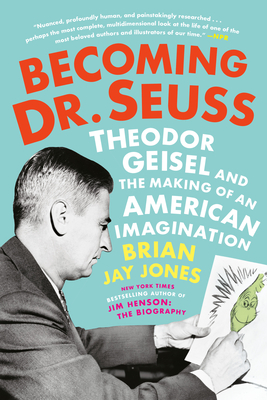 Against a backdrop of all the momentous events of the 20th century, Jones has crafted a true page-turner of Geisel’s transformation from a class cut-up to a passionate and rigorous artist who became one of our most influential writers and educators. He reveals the man and the artist, with his warts, bruises, and prejudices alongside his compassion, genius, infectious humor and ability to evolve. One of the most enjoyable biographies I’ve read.

Dr. Seuss is a classic American icon. Whimsical and wonderful, his work has defined our childhoods and the childhoods of our own children. The silly, simple rhymes are a bottomless well of magic, his illustrations timeless favorites because, quite simply, he makes us laugh. The Grinch, the Cat in the Hat, Horton, and so many more, are his troupe of beloved, and uniquely Seussian, creations.

Theodor Geisel, however, had a second, more radical side. It is there that the allure and fasciation of his Dr. Seuss alter ego begins. He had a successful career as an advertising man and then as a political cartoonist, his personal convictions appearing, not always subtly, throughout his books—remember the environmentalist of The Lorax? Geisel was a complicated man on an important mission. He introduced generations to the wonders of reading while teaching young people about empathy and how to treat others well.

Agonizing over word choices and rhymes, touching up drawings sometimes for years, he upheld a rigorous standard of perfection for his work. Geisel took his responsibility as a writer for children seriously, talking down to no reader, no matter how small. And with classics like Green Eggs and Ham, and One Fish, Two Fish, Red Fish, Blue Fish, Geisel delighted them while they learned. Suddenly, reading became fun.

Coming right off the heels of George Lucas and bestselling Jim Henson, Brian Jay Jones is quickly developing a reputation as a master biographer of the creative geniuses of our time.

Brian Jay Jones is the critically-acclaimed, bestselling biographer of three books on some of the world’s most iconic creative figures, including Jim Henson: The Biography and George Lucas: A Life. For nearly three decades, he has served as a speechwriter for elected officials at all levels of government, including ten years in the United States Senate.

Brian currently lives in Virginia with his wife and a very excitable dog.

Longlisted for the Andrew Carnegie Medals for Excellence in Nonfiction

“Becoming Dr. Seuss is more compelling than mere pop hagiography; it is sweeping in scope, unstinting in detail, and willing to criticize or contextualize when needed.”—The New Yorker

“Nuanced, profoundly human, and painstakingly researched, this 496-page biography is perhaps the most complete, multidimensional look at the life of one of the most beloved authors and illustrators of our time. . . . While it is a standard biography in general terms, Jones goes above and beyond to contextualize Geisel in the larger picture at every moment of his life. [A] fascinating read that discusses the origin of the humorous, simple rhymes, bizarre creatures, and magic that characterized Geisel's books while also showing the author's more radical side as an unemployed wanderer who abandoned his doctoral studies, a successful advertising man, and a political cartoonist.”—NPR

“A rich, anecdotal biography . . . Whether readers are familiar with Dr. Seuss books or not, they will find this biography absorbing and fascinating.”—Kirkus Reviews (starred review)

“This attractive biography should be on the bedside reading table of thousands of Dr. Seuss lovers, and deservedly so.”—Library Journal (starred review)

“A warm, defining biography of one of the most beloved writers of this or any time.”—LitHub

“One of the most anticipated books of Spring 2019.”—Publishers Weekly

"While acknowledging Geisel’s flaws and debts to others, Jones convincingly shows him as a transformative figure in children’s publishing, both as an author and cofounder of the Beginner Books imprint. Fans of Dr. Seuss will find much to love in this candid but admiring portrait."—Publishers Weekly

“One of the buzziest books being released this May 2019.”—O, The Oprah Magazine

"Profiling cultural empires and their instigators is familiar territory for Jones, who also wrote Jim Henson: The Biography and George Lucas: A Life. It’s clear that Jones is experienced in extracting details from the most innocuous letter or interview, fleshing out the lives of cultural groundbreakers we’ve long admired. As all successful biographers should do, Jones doesn’t cheerlead his own writing style by adding unnecessary flourishes or similes; he lets the subject’s actions and quotes energize the book. Thankfully, Geisel is a hilarious and insightful character whose love of literature is almost as infectious as his timeless rhymes."—The Washington Post

"1 of 9 notable releases over the next two weeks.”—Vulture.com

“A loving portrait of a singularly creative man, whose influence is as strong today as ever.”—AV Club

“Finally! The solution to the mystery of where Dr. Seuss earned his PhD. Brian Jay Jones also reveals the true identity of Chrysanthemum Pearl; the etymology of the word nerd; the political leanings of Horton and Yertle; and the relationship of Krazy Kat to the one in the hat. It comes as no surprise that Theodor Geisel was a born storyteller; prying truth from fact, Jones pins our favorite fabulist nimbly, colorfully, and splendidly to the page.”—Stacy Schiff, author of The Witches

“Readers of Becoming Dr. Seuss may be astonished to learn in this rollicking ride of a biography that Theodor Seuss Geisel—progenitor of the most anarchic animals of all time—was himself a radically bizarre creation, every bit as strange and emotionally uncoordinated as a Snoo or a Sneetch. Childless, chain-smoking, and cocktail-swilling, bawdy and argumentative, Geisel got his unlikely start promoting Standard Oil’s fly-killing insecticide (his ad campaign featured the immortal tag line 'Quick, Henry! The Flit!'); drawing coarse political cartoons (sometimes racist or misogynist); and serving as a World War II understudy to Frank Capra, making films teaching grunts to evade death and mosquitoes. His epic transformation into one of the most beloved and bestselling children’s writers of all time, winner of Oscars and a Pulitzer, is a poignant, affecting tale of a man who mastered the art of concision through imagination and sheer toil yet could never bring such exactitude to his own life, callously replacing his wife and editor of forty years, a suicide, with her rival. In Jones’s telling, the Seussian legacy emerges triumphant, elevating the power of children’s literature. 'I no longer write for children,' Geisel said proudly, at the end of his life. 'I write for people.'"—Caroline Fraser, author of Prairie Fires: The American Dreams of Laura Ingalls Wilder

“Once again, Brian Jay Jones takes us on a beguiling deep dive into the life of one of the leading lights of American popular culture. Written with verve and warmth and a close attention to both the life and the times in which it was lived, Becoming Dr. Seuss brims with charm and humor from beginning to end.”—William Souder, author of On a Farther Shore: The Life and Legacy of Rachel Carson

“Brian Jay Jones offers a richly detailed, admiring biography of Theodor Geisel, the man whom children and adults the world over would come to love as Dr. Seuss, and goes on to say [Jones] provides a meticulously detailed yet thoroughly engaging look at the life and artistry of this American original.”—BookPage

“Worthy of a complete read.”—New York Journal of Books

“An important and interesting book about an author who greatly influenced our culture and most certainly our educational system.”—The Missourian

"What this biography does best is account for Geisel’s demanding creative habits. He was dedicated to work and, when he had the power and leverage, he fussed over every detail of his books, from the size of the page and the font to the placement of text and picture. He insisted on the exact colors he required, and his longtime publisher, Random House, usually sensibly let him have his own way; his titles eventually sold in the hundreds of millions."—Christian Science Monitor