***We are offering FREE media mail shipping on books. We are open from 10am-7pm Monday through Saturday and 10am-6pm Sunday. Phones may not be answered due to a high volume of calls.*** 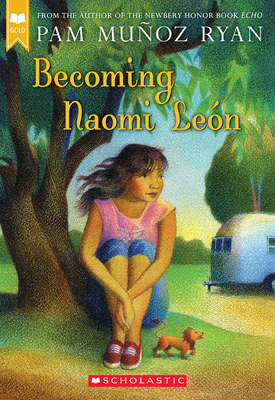 Naomi Soledad León Outlaw has had a lot to contend with in her young life, her name for one. Then there are her clothes (sewn in polyester by Gram), her difficulty speaking up, and her status at school as "nobody special." But according to Gram's self-prophecies, most problems can be overcome with positive thinking. Luckily, Naomi also has her carving to strengthen her spirit. And life with Gram and her little brother, Owen, is happy and peaceful. That is, until their mother reappears for the first time in seven years, stirring up all sorts of questions and challenging Naomi to discover who she really is.

Awards and Praise for Becoming Naomi León:
A Pura Belpré Honor Book
Americas Award, Commended
Schneider Family Book Award Winner
Tomás Rivera Mexican American Children's Book Award Winner
Book Sense Book of the Year Award Honor Book
"Engrossing." -- The New York Times
"Ryan's sure-handed storytelling and affection for her characters convey a clear sense of Naomi's triumph, as she becomes "who I was meant to be." Kirkus Reviews, starred review
"Once again, Ryan crystallizes the essence of settings and characters through potent, economic prose... a tender tale about family love and loyalty." Publishers Weekly, starred review
"Exciting...heartbreaking." -- Booklist
"[Becoming Naomi León] has its own uniquely affecting emotional core." -- The Horn Book
"Ryan has written a moving book about family dynamics. While she explores the youngsters' Mexican heritage and gives a vivid picture of life in and the art of Oaxaca, her story is universal, showing the strong bonds and love that make up an extended family. All of the characters are well drawn, and readers will share Naomi's fear until the judge makes the final decision about her future." -- School Library Journal
"Symbols abound, and readers of all ages will enjoy reading of Naomi's transformation and triumph." -- VOYA